A recent post on Tea Circle, “The Myth Myanmar Can Afford to Ditch”, argues that Burmese women are free, independent, and empowered. Alas, available data does not support such an argument.

Broader Burmese society reflects these views. According to the 2014 census, 270,000 women identified themselves as ‘employers’ – i.e., business owners, whereas 777,000 men identified themselves as business owners. Of the 100 largest Burmese conglomerates, only three are run by female CEOs. The census also revealed that for 7.2 million women, their primary job is ‘household work’, although this is true for only 270,000 men. On average, a working man earns 138,000 kyats per month; a working woman earns 110,000.

Women are excluded from top government jobs too. Daw Aung San Suu Kyi remains the only female minister. Only 14.5 percent of the Union Parliament (excluding the seats set aside for the military) are women – an improvement from the previous parliaments but still a long way to go before the country achieves a parity. Likewise, there is a scarcity of women in other government departments and branches. 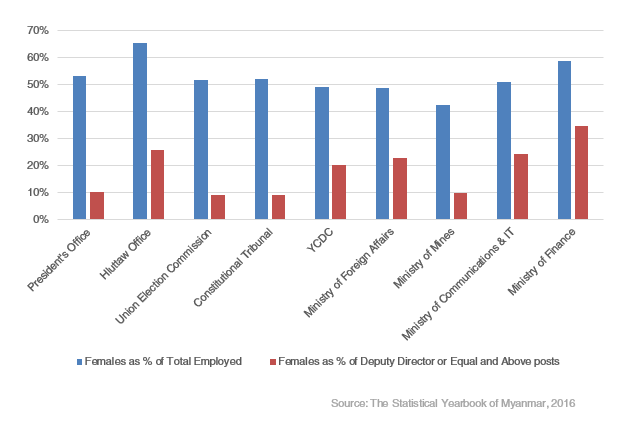 The Foreign Office, whose workforce is 49% women, drops to 23% women at senior levels. From 1967 to 2015, the country had no female ambassador. That year, Daw Yin Yin Myint was appointed ambassador to Germany, becoming the country’s second female ambassador ever, following Daw Khin Kyi, the widow of General Aung San, who served as Burmese ambassador to India from 1960-67. In the Ministry of Mines, 42% of its workforce is female, but 10% of its senior level positions are females. Female mining engineers are rare and in local culture, it is believed that if a woman were to enter a quarry or a mine, said quarry will stop producing minerals or collapse altogether.

In addition to the lack of women in leadership roles, women’s position domestically is precarious too, where they play Nancy to the patriarchy’s Bill Sikes. In the 2015-16 Demographic and Health Survey, it was found that 51% of women agree that wife beating is justified under certain circumstances, a slightly higher percentage than the 49% of men who agreed. Men, however, are no paragons of virtue: 21% of men believed that wife beating is justified if their wives were “involved in too much social activity”. In Yangon, nearly two in five men held such a view.

Fifteen percent of women ages 15-49 have experienced physical violence, and three percent of women ages 15-49 have experienced sexual violence. However, only a small proportion of these violent attacks ever get reported. In 2016, there were 1,100 reported rape cases in Myanmar (and 700 cases in the previous year).  Many rapes go unreported due to a culture of silence; a well-known Burmese saying, “Don’t make one shame into two,” exhorts against a rape survivor going public. Among women who have experienced physical or sexual violence and sought help, the majority sought help from family or neighbors. Only 0.9% of women noted they went to the police; a further 2.5% and 2.9% sought help from lawyers and social work organizations, respectively.

All these statistics are just the tip of an iceberg in a country where information is not readily available – information such as the availability of safe abortions. Even in rape cases, and in cases where the mother’s life is in danger, abortion is prohibited in Myanmar. Many suffer and perish in back-alley clinics.

As such, we cannot afford to ditch the ‘myth’ of female repression. We need to fight harder for gender equality, and as the original author noted, there is a lot to be hopeful about in Burmese society. The same Asia Foundation report cited above noted that 82% of respondents feel a woman should make her own choice when voting. The Demographic and Health Survey found high asset ownership rates, control over earnings, and participation in decision making for women. Labour participation amongst 20-24-year-old women is high at 72 percent.

From an economic standpoint, it makes sense to keep talking about and promote women’s welfare and empowerment. Our internal assessments at First Rangoon show that if Myanmar increases female labour participation from the current 54 percent to 75 percent, the country’s GDP will increase by $7 billion (13.8% growth).

It should be a goal of the current government and parliament to maintain the high labour participation rate among the 20-24-year-old women, and amend the laws and institutions that disenfranchise and disempower them. Changing societal views and attitudes, not to mention religious and cultural teachings, will take time and generations. The institutional and legal reforms, however, can – and should – start immediately.

Born in Yangon, Shine Zaw-Aung studied International Relations at Stanford University, where he was honours fellow at the Center for International Security and Cooperation. He co-founded First Rangoon, a consultancy, and contributed to the Myanmar Ministry of Foreign Affairs at MISIS. Shine is currently working towards his MBA at the University of Chicago.

The 2014 Myanmar Population and Housing Census

The 2015-16 Myanmar Demographic and Health Survey

Myanmar 2014: Civic Knowledge and Values in a Changing Society